I don’t know much about solar weather, but the overnight solar flare (the second largest flare during this solar cycle) got me interested in reading what was really going on.

First of all, Solar Cycle? That’s really just the cycle between high and low numbers of sunspots on the surface of the sun, which are like magnetic tornadoes. We are currently in Solar Cycle 24, which started on January 8th, 2008 and is expected to peak in early 2013. You can see the cycle in the graph below, which shows the number of sunspots observed and the number expected: 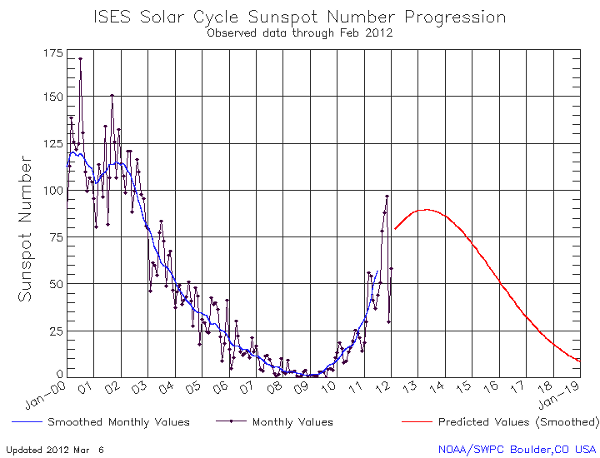 Our current Solar Cycle 24 can be seen beginning at the low point near 2008 and steadily rises to a projected high point in 2013. Depending on sunspot activity, Solar Cycles can last between 9 and 14 years, with the average length at 10.66 years.

When solar activity reaches Earth, there is always talk of “radio blackouts”, which are related to high frequency communications radios, not the radio stations that we listen to in the car. SolarHam has a good explanation of the ionization in the atmosphere that causes radio interference. If Earth’s magnetic poles are properly aligned with the solar magnetic energy, it will cause the highest interference. Here’s a quote and a video from the NOAA Space Weather Prediction Center that explains specifically what is happening with this storm:

The most visible effects of solar/magnetic activity are the auroras at both poles. While we won’t be able to see the auroras from most of the United States, you can check out some photos from Finland, Canada, and Lapland and aurora photos on the Flickr blog! 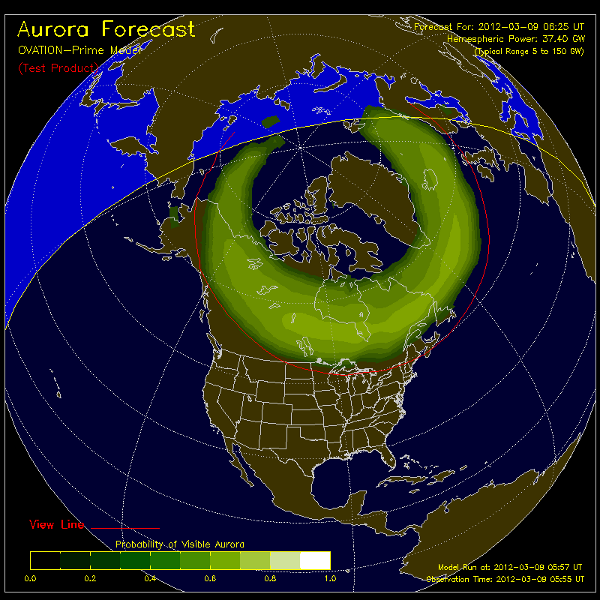 Aurora conditions via NOAA OVATION Aurora Forecasts, with the red line showing the areas that have a chance to see the aurora