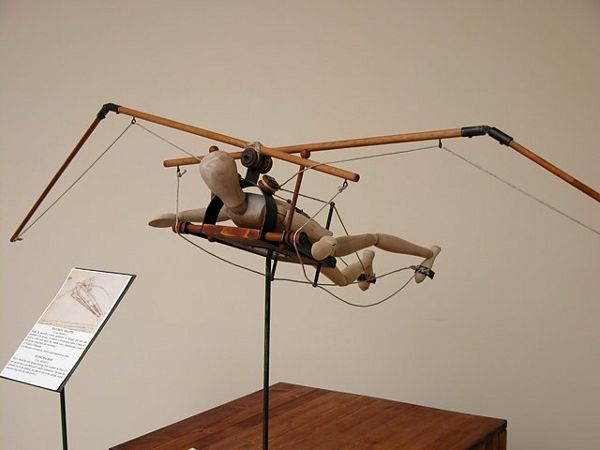 A model of Leonardo da Vinci’s human-powered ornithopter (powered by legs, because Leonardo knew what he was talking about) via slowknits.com

I hesitate to write about this, because it gives a silly story even more attention, but Wired’s handling of the “human birdwings” story is approaching the ridiculous.

In the same week that This American Life had to reverse their position on a story which was revealed to be false, Wired seems unwilling to admit that they went forward with a video and story which is completely untrue.

The Human Birdwings story was published on March 20th, and was quickly met with comments calling out the CGI and camera trickery (view the comments on the original story and the Hacker News comments). Rather than post a retraction or even an update that their glowingly naive article might not be correct, both the author and Wired Science went silent after posting the story, and, according to Wired’s updates, the headline was only changed to something more skeptical at 2:15pm EST the next day.

“This is journallistically embarrassing for Wired.”

Wired’s attempt at a response was to toss the story over to another blogger at Wired for some kind of camera shake analysis, with no mention of the fact that the Human Birdwings video looks like a Red Bull Superbowl commercial or something Pixar would put together. Their second attempt, thankfully, resembled some kind of journalism, where they look into the video creator’s background and find nothing but lies.

No one was there to observe the Human Birdwings tests, so it’s not a matter of whether Wired (or Gizmodo) can prove that it’s real, but it’s irresponsible to take a single-sourced video and write about it as if it’s true just because you got a press release about it.

Want to know how to handle your screw up? Look at how The Register corrected their story:

You may well be asking yourselves, having viewed the vid above, “is this a fake?”

We’re not saying absolutely for sure that it is. We do note that there seems no reason for the ground cameras to stay so far away from the intrepid birdman during launch, and that the wings show no signs of the loading they would be under during such a flight. Furthermore the hardware doesn’t appear to contain a battery of the sort which would be required – bearing in mind that this would be a very large battery even for a flight technology more efficient than an ornithopter.

We strongly suspect that this has no more validity than certain other exotic personal-flight inventions which have been known to entrap journalists in the past.

However we would stand by our statements above “it still looks like a marvellous way to fly” and “it’s still an admirable achievement”.

We would also point out that there’s nothing intrinsically impossible about entirely human-powered ornithopters: it’s been done for real. -Ed.

More tearing into the Birdwings hoax over at Gizmag and LiveScience investigates whether it’s just a viral ad.

Update: Looks like Wired caught on to the scam and has updated their story.

This Is Your Captain Speaking: Welcome to Letter Airplane! This is why your LED Christmas lights flicker Black Friday Hype Squad What is a Bitcoin and how do I buy one? A Fun Little Workflow for Developing Static Sites